Postcards: an influance, a collection, and obsession 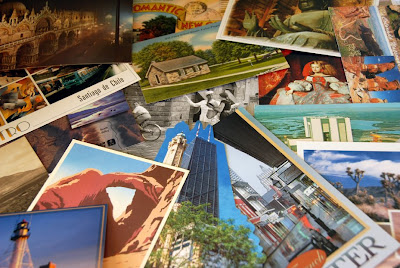 I love postcards. I collect them from wherever I travel, even if I've been there before. I buy them from antique shops, search though my relatives things, and ask friends to send me one when they go traveling. I have postcards that are over 100 years old and some that were just made this year. I have hand-made ones, limited edition ones, and ones from the drugstore counter. Some of them advertise products, announce art openings, and some were made just to have something nice to write on. I love postcards.

About a month ago my brother said he liked my photos because they looked like postcards. I know many photographers who would have taken this as an insult, but it made me happy and I said, "Thanks." I think postcards have a large influence on my work. The idea of capturing one image that stand for everything that one place has to offer, or at least what someone wants to remember and boast about a place is interesting. Postcards can also capture the era in which they were produced.

One of my favorites from my collection is of the "Chasco Fiesta" in New Port Richey. 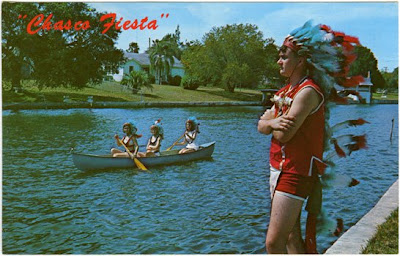 The background is quintessentially New Port Richey when one is down by the river. The era is set by the models clothing. It is also gives me a bit of a chuckle to see these young people dressed up in bad Indian costumes to represent a festival celebrating the founding of the town. Even today the celebration is a bit cheesy. I moved to New Port Richey when I was ten and I marched in my elementary's band in the parade. I guess this is why it is one of my faves.

By collecting, I have beautiful photos from all over the world and sometimes bits and pieces of other people's lives. This postcard from Kyoto mailed in 1946 is a great example. 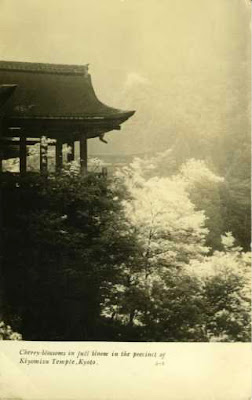 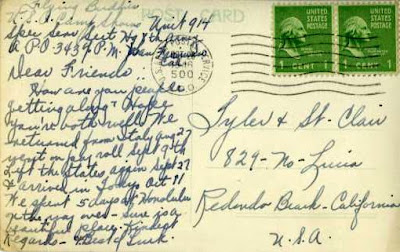 Even though I have boxes and boxes of postcards (I had thought they would be a great thing to collect and not take up too much space, LOL), I'm always happy to get more (Hint, Hint), because I love postcards.
Posted by Lorissa J. Longfellow