One of the earliest alignments of Route 66 cut right over the Black Mountains of Western Arizona and headed towards the Colorado River and California. This was rough terrain, including some serious mountain grades and a narrow road with hairpin turns. Many cars of the time couldn’t make it up the hill and cars were driven by locals or towed over the Pass. On the eastern side of the mountains that rises up from the Mojave Desert is Cool Springs Camp.

This route existed as the Old Trails Highway and officially became Route 66 in 1926. The increase of traffic created a need for services to assist travelers including water, gas, oil and a bite to eat. Eventually, the Walker family built cabins so weary travelers could get rest along with their chicken dinners.

Thanks to America’s love affair with the car and Nat King Cole’s hit song “Get Your Kicks on Route 66” (written by Bobby Troop), traffic on the road increased to the point where the road through the Black mountains be came extremely dangerous. The heyday of Cool Springs and all the small towns along this alignment was short lived. In the early 1950’s a new and less dangerous alignment of the road was created and Cool Springs was by passed. This new stretch eventually became interstate 40. By 1957 the traffic though the old route had decreased so much that it became increasingly difficult to maintain.

The death of Cool springs came when in the mid 1960’s the buildings caught fire and left nothing but the foundation and the stone pillars. The frame of the station was rebuilt in 1991 for the movie “Universal Soldier”, only to be blow up and ruins once more.

The true rebirth of this historic landmark was in 2001 when Ned Leuchtner was able to purchase the property and follow his dream of rebuilding it. You should visit the Cools Springs website for a more in depth history and/or to learn more about the rebuilding of this landmark. 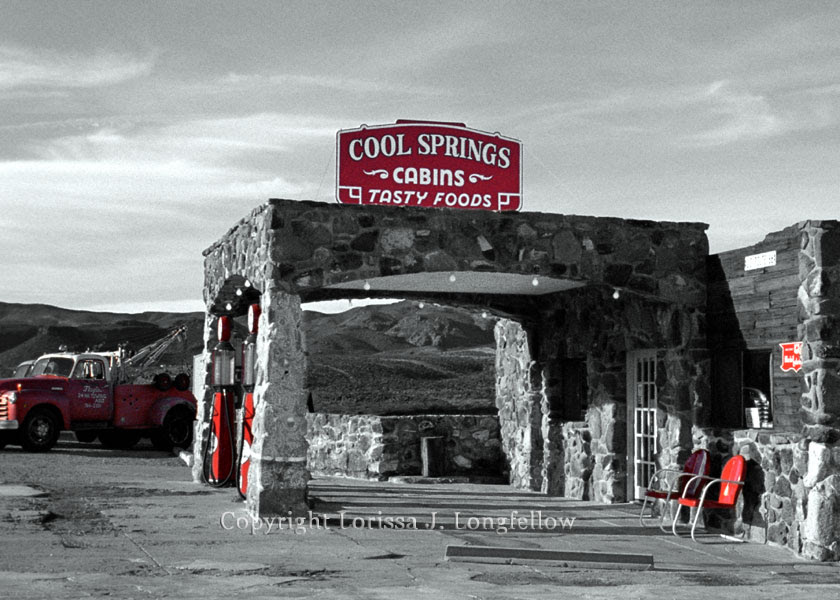 This photo was taken right after the first phase of rebuilding. Since they have added on, based on the original foundation and photos provided by the original owner’s family. You can stop by and get a drink or some road memorabilia and support the history of the road.

Don't for get to visit my website and/or etsy shop for this and more Route 66 photographs. In my etsy shop I also offer magnets of some route 66 landmarks.

I LOVE the black & white with the reds - Very cool!

What a great picture, Lorissa! Your Route 66 series is fantastic!
Holy Craft

I love the picture- looks great and i like how you did the black n white.

I love this picture!