A Day at the Beaches - Florida Vacation Part 2

Yes. I said Beaches, with an s. Well what else do you do when your on Vacation on the coast in Florida? A day at the beach of course. Or if you me, you make sure to get to two beaches in one day.
I had actually hoped to spend as much time on the beach as I could, so the second day of my visit we headed for Dunedin's Honeymoon Island State Park. The girls seemed to love it, at first. They didn't enjoy the sand on their fruit. My daughter really didn't like the seaweed that lined the edge of the water or the rocks that you had to walk past to get out to the sandy, shallow sand bars. It was also her first experience, at four, of waves. I said waves, but they were so small that I didn't even think of warning her about them. So small, in fact, they barely "crashed" as they rolled onto the shore, but when you are only three feet tall and trying to catch small fish in a net out on the sand bar, they can seem quit large as the water around you seems to push your little body around. Especially when your not expecting them. Opps. 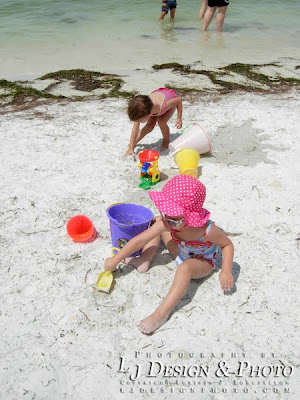 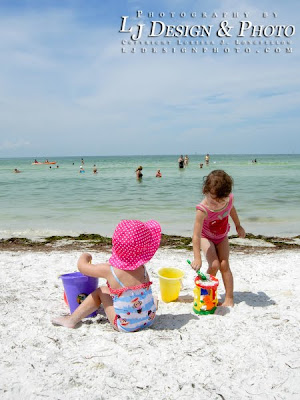 Eventually the girls decided that the shore was a large sandbox and that building, mixing, and digging was exactly what they wanted to do. Ah, what a lovely day at the beach. It really was great till we decided to leave and we had sandy, tired, winy, and wet toddlers. "How quick can we get back to your home?" I asked my friend.

After a late afternoon nap and dinner we headed for Sunset Beach for Tarpon Spring's Music on the Beach. The night we attended the Bayou Boys played a mix of Country, American, and Rockabilly covers. Oh so, so Florida.

It was about a mile walk with the little ones in strollers and the strollers loaded down with chairs, snacks, beach toys, and the all important wine. The evening was fun, full of watching the girls play in the sand as the sunset with a background of live music and getting to know my friends neighbors. A relaxing and fun evening. 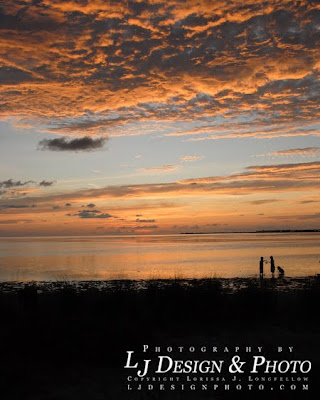 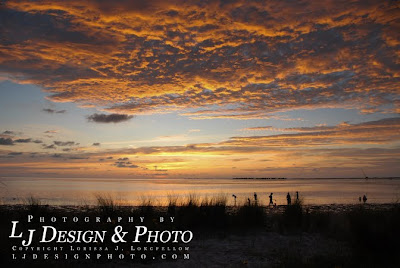 This was my last big day at the beach during my vacation because after this my daughter decided that the beach just wasn't for her. I can't say I was a big beach person while I was living in Florida, but when you only have a week or two to visit it a year, you want to make the most of it, and go as much as possible. Granted, I've ever been big on sand, partly because it can get in places it shouldn't and irritate, but I was disappointed that my daughter was more interested in spending time at a pool then the beach. But that is a story for another day.
Posted by Lorissa J. Longfellow

Oh what a fabulous time!