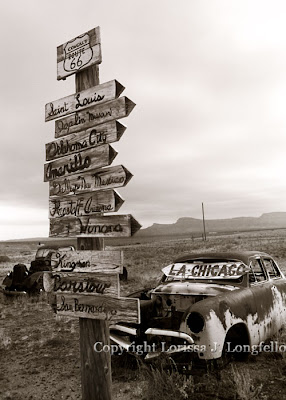 I've been thinking about doing a photo of the week or a photo a day for the blog, but I wasn't sure if I should do a theme or a just whatever comes to mind. Once a week doesn't seem like a lot, but then once a day just sounds to overwhelming with everything else I do, unless I just posted a photo and that doesn't seem right. But I think I've finally decided on something.
Today I'm going to start a Tuesday theme photo, I can handle that. It will be Mother Road Tuesday. Each Tuesday I will post a photo from my adventures on Route 66 and try to give you information on where it was taken. Of course all of these photos are available for sale.
Route 66 has a large following, and there are many photographers and writers who use it as a base for there work, there are websites dedicated to it's history, and a great magazine that covers both historical and present happening on the road. Hopefully I can give another interesting perspective on the road and in the future I many cover other of America's back roads that are worth the time to just drive and enjoy.
This photo is titled, "Which Way Today." It was taken in Truxon, Az on the longest stretch of original road left. Cowgill’s, mini-mart with a drive-up window, has a sign out front that list all the towns in the classic, "(Get Your Kicks On) Route 66" song. The place has recently been sold, the cars have been moved, but the sign still remains today. This photo was taken during a winter storm with Black and White film.

This is also the print that Marisa won in the Earth Day giveaway. Congratulations again Marisa.
Posted by Lorissa J. Longfellow

Your photos are so lovely LJ. I love your Route 66 prints! :o)

Hurray for me. I can't wait to have that picture hanging up in my bedroom next to the Corvette print that I already have from your shop!!