The Whale of Route 66 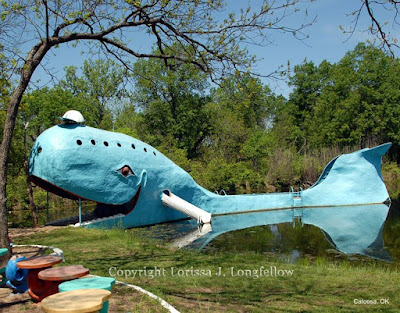 When I think of Route 66, I think of a route though small town America born to take travelers and adventures westward. I think of the great dust bowl of the 1930 and 1940's that helped to create the California Dream. I think of curio shops, gas stations, motels, and dinners serving pie. I also think of tacky tourist traps and attractions.
In the late 1950's and 1960's it was popular for families to take a trip along Route 66 to visit the Grand Canyon or to Anaheim, CA to visit Disneyland. And at a time when interstates and speed limits over 55 didn't exist, it took much longer to get anywhere. Families and other travelers could make their whole trip a vacation, thanks to the roadside attractions, small but fun stops along the way.
Catoosa, Oklahoma's now famous blue whale was actually one of the later arrivals, being built in 1970, but is still one of the most recognizable attractions of Route 66 to fans today. For one of the most complete stories on the whale and its original owner, Hugh S. Davis, you should visit the Oklahoma Route 66 Association's website. The story of the whale has romance, local flair, and a great love of animals. Who could ask for more?
The waterpark closed only ten years later, but this beloved whale has had fans over the year raising money to refurbish and paint it's 2,520 square foot surface. The latest being Hampton Hotels' “Explore the Highway with Hampton, Save A Landmark” Program.
Posted by Lorissa J. Longfellow

This is fabulous! I adore a good tourist trap. :)

That is so cool. I love roadside attractions!

That is so cool- i love the whale

Who couldn't love a ginormous blue whale that you can walk in!

Growing up in the Ozarks (Now in California) I heard mention of Route 66 so many times, and seen the novelty signs everywhere, but I never knew what the heck it really was other than some highway. I'm almost ashamed to say that I just learned more in your blog post than in my entire life about Route 66!

Very cool whale! I have never been on route 66, but my parents have been.