A historic day of hope.

While we don't know yet how President Obama will be remembered in the historical books, we do know that today is a historic day and for many Americans a day for hope. You can feel it in the air, just as you could the day he was elected into office. It seems like it has been years since so many people are excited, and some nervous, about the inauguration of a President.

I think it is not just that President Obama is the first African American President, though you can't discount that fact, but part of the reason for the excitement is that Obama was both the underdog and a positive voice. It was the Americans that believe in him and did not give up that helped excelled him to the White House. It feels like the positive won out over the all the negative rhetoric of the last 15ish years. I'm not saying that the past few presidents did not have their positives, but there always seemed to be something negative looming over their terms. 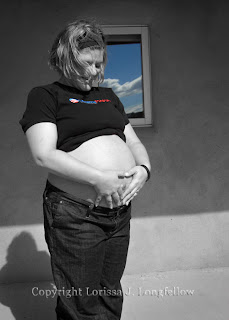 Today I reflect on the past and consider about what I hope for in the future. I was glad to vote this past year for someone I truly believed could be a good if not great president. I believe he has positive qualities that will sever him well in this job and give many young Americans a new champion to look up to. I know that the next few years will not be easy, that even positive change can be a difficult road. I have a realistic outlook of the world and where our nation stands, but I still feel that in four years from now the United States will be stronger.
Posted by Lorissa J. Longfellow

I'm so thrilled that my daughters will never know a time in which there was no such thing as a black president. Both of my girls see pictures of Obama and say "President Obama!!" To them, it isn't a huge new change for their country and the world they live in... but just life as they know it. This is a good time to be an American, I believe!

I think that regardless of political views, it is wonderful for Americans to have broken down that racial barrier. My son also will never remember that it was such a big deal for someone not white to be elected.

Me too Elegant. I love it that my daughter knows who the president is and is not aware of the obstacles of the past. I'm also glad she will grow up in a time of hope.

While it's good that kids know who someone--Obama or anyone--is for their accomplishments rather than their race/color/creed, it is still important that they know the obstacles of the past. How else would the present or future make sense in the sense that they do in relation to those things (leaving politics aside). I appreciate that you included the sentiment that some are nervous among the hopeful. That said, you did write a fine post here...well stated and quite thoughtful.